Today marks what would have been Elvis Presley’s 80th birthday. I’d like to wish a very happy birthday to man who was the King of Rock and Roll (and my real father, according to my Mom.) 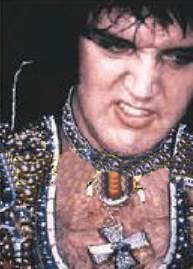 The King, seen here rocking black hair dye and a pound of eyeliner in 1975. Suck it, emo kids.

The Six Douchiest Elvis Songs Ever Written (AKA: My rejected Cracked.com pitch)

(NOTE: I LOVE the writing on Cracked.com and recently pitched the following piece as my first article. I got shot down in spectacular flames, but am already working on a new pitch. In the meantime, enjoy the ruins of my artistic failure below.)

In his heyday, Elvis Presley made women swoon through a proprietary blend of tender love ballads and bedazzled capes. But any artist as big as the King – both figuratively and (in his Percocet-and-lard sandwich phase) literally – is bound to eventually record a few songs that make him sound like a giant bag of dicks. Lyrically speaking, of course. Even when his weight led to him having to be transported by crane into Madison Square Garden, the man had the voice of an angel, and I’ll shiv anyone who says otherwise.

“A Little Less Conversation” was written for Elvis by singer Mac Davis (known in the 1970s for both his variety show and impressive white-boy Afro) and the awesomely named Billy Strange for “Live A Little, Love A Little” – one of a series of terrible 1960s movies that Elvis was forced by his manager Col. Tom Parker to make. It was directed by frequent Elvis movie director Norman Taurog, who shrewdly went blind after filming had ended – presumably to avoid having to direct “Charro!”.

Elvis (and his magnificently lacquered televangelist hair) star in the film as a singing newspaper photographer. As a hep, macho playboy, Elvis enjoys driving dune buggies, being overly tan, and telling women to shut the fuck up through song. After trying to seduce a girl with what appears to be a cross between a ham radio and a Sybian*, our hero bursts into “A Little Less Conversation” at a swinging 1960s pool party. Awkward hippie dancing ensues. 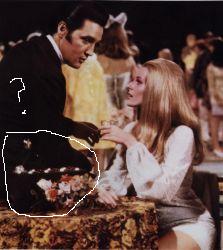 Seriously. WTF is that*?

In summary: I bought you an Appletini and listened to a story about your cat.  Blow me already.

Singer/songwriter Jerry Reed wrote “U.S. Male” for his 1967 album “The Unbelievable Guitar & Voice of Jerry Reed.” Elvis loved it and released his own version as a single in 1968.

The asshat lyrics – presumably subcontracted by Reed out to an insecure caveman – contain the following threat:

You touch her once with your greasy hands
I’m gonna stretch your neck like a long rubber band
She’s wearin’ a ring that I bought her on sale
And that makes her the property of this U.S. Male

Note that the ring was on sale. What a prince.

In summary: Women, can’t live with them – can’t keep them chained in your homemade sex dungeon.

This is a ballad about a cruel Southern plantation owner looking for his runaway slave. Ha ha! Just kidding. It’s a love song… that doubles as a PSA about domestic abuse.

“Dirty Dirty Feeling” was originally composed for the soundtrack to “King Creole” but did not make the final cut. However, Elvis liked it and included it on the album “Elvis Is Back!” – the first record he released after his 1960 discharge from the Army.

I’ve got a dirty, dirty feelin’
Dirty feelin’s goin’ on
You know I almost hit the ceilin’
When I woke up and you were gone 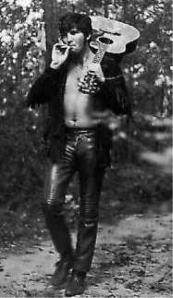 Elvis loved the song and it became a staple of his 1970s performances. A douchey staple since the lyrics patronize a starving girl living on ditch weeds. Equally hilarious? Her grandmother was apparently eaten alive by an alligator. Good times.

Down there we have a plant that grows out in the woods and the fields,
and it looks something like a turnip green.
Everybody calls it Polk salad. Now that’s Polk salad.
Used to know a girl that lived down there and
she’d go out in the evenings to pick a mess of it…
Carry it home and cook it for supper, ’cause that’s about all they had to eat,

Polk Salad Annie,
Gator’s got your Granny.
Everybody said it was a shame.
Cause her Mama was working on a chain gang
What a mean, vicious woman…

When feeling playful, Elvis would include “chomp, chomp” noises after the line “Gators got your granny.” Because why not?

In summary: Another person’s grinding poverty is always good for a laugh. Schadenfreude for the win!

Elvis released this song in 1960, where it reached number one on the U.S. charts. Fun Fact: Barry White heard this song while doing jail time in the early ‘60s and was supposedly so moved by it that he decided to ditch his life of crime to be a musician. And thus was launched the singer of the sexy, sexy songs that played in the background when our parents conceived many of us. Ewwwww.

In summary: My love (and this huge boner) won’t wait. Immediately ride me like a rodeo clown.

“(There’s) No Room to Rhumba in a Sports Car”

Elvis recorded this song for the soundtrack of yet another terrible ’60s film, “Fun in Acapulco.” Frustrated that his date’s tiny sportscar is not big enough to bone in, he gallantly suggests that they find a phone booth* in which to have public sex.

(*These used to be a thing. Ask your grandparents.)

What a way to waste a day with you
Nothing happens that can tell the truth
Let’s go out and find a telephone booth
Yeah that’s a better place, I like more space

In summary: At some point tonight, I will attempt to romantically nail you in an Applebee’s parking lot.