Did Hitler Escape to Argentina in 1945? Is There a UFO Connection? Could This Headline Get Any Weirder?

The authors of Grey Wolf: The Escape of Adolf Hitler claim to have proof that der Fuhrer and Eva Braun escaped their Berlin bunker and fled by submarine to Argentina in 1945. This impressively nutty conspiracy theory outlines a plot in which the U.S. military turned a blind eye to the escape in exchange for access to advanced Nazi military technology.

The creepy part is that UFO conspiracy theorists have long held that the U.S. government gave a pass to Nazi scientists (like Wernher von Braun, AKA: the “Father of Rocket Technology”) so they could work for NASA to help the U.S. beat the Russians in the Space Race. (Supposedly the German military had gained secret rocket technology from reverse-engineering a UFO that crashed in a German forest near Frieberg in 1936.) So, that part of the story actually kind of rings true. And Joseph Stalin famously believed that Hitler escaped to South America, telling  the Allies (including President Truman) as much at the Potsdam Conference of 1945.

How ghastly would it be if the whole thing was valid? Due to superior Nazi UFO knowledge, did the most evil man in history get to live out his golden years in an Argentine village?

The villagers were surprised by kindly old Herr Smith’s reaction to holy water.

It would be funnier if it wasn’t true.

Patrons of an Alabama liquor store were recently surprised to see a man dressed in a ghost costume, i.e., a bed sheet with poorly placed holes, run into the establishment. He did a lap around the store and then fled without stealing anything because his costume kept falling over his eyes. So…… clearly a master criminal. 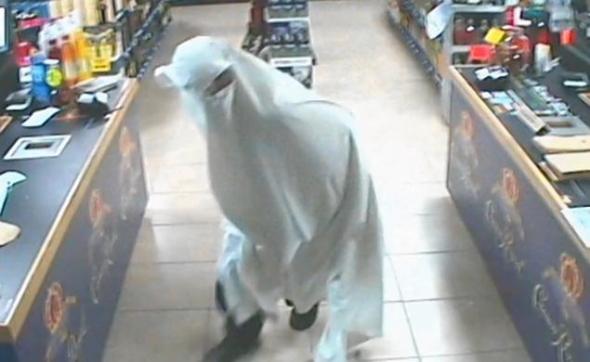 Note: Since this happened in Alabama, there’s a chance that this mystery man wearing a sheet may just be a profoundly retarded Ku Klux Klan member, i.e., all of them.

You have to hand it to the guy. What he lacks in criminal cunning, he makes up for in undisputed disguise hilarity. Tune in next week when Captain Thought Process up there tries to rob a Denny’s dressed in a leopard-print catsuit and a blindfold.

I miss our old state fair mascot. This new version looks less like Big Tex and more like Rapey Will Rogers. 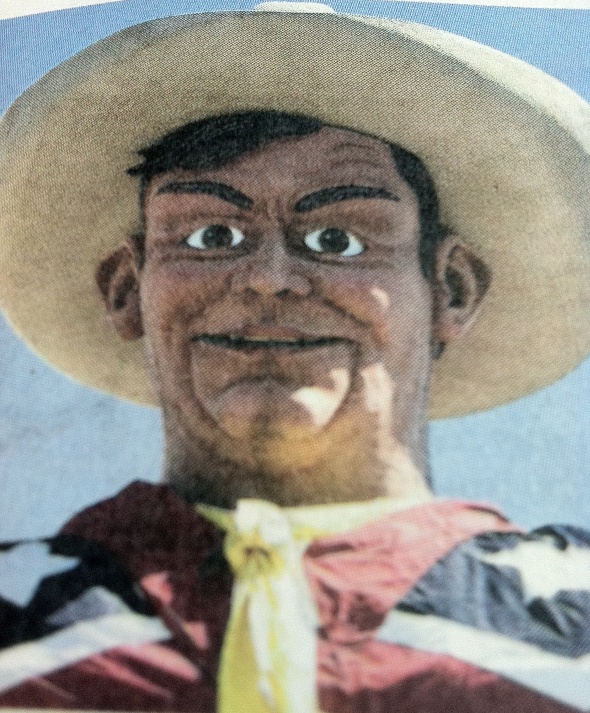 Howdy, ma’am! Does this rag smell like chloroform to you?

The Saddest Book in the World

It Sounds Better in German

German is the non-nerd version of Klingon: a guttural language best used for barking orders at people and threatening Poland. However, it’s very good at one thing — effectively condensing a complex concept into a single useful word. Words like Schadenfraude (taking pleasure in other’s misery) and Handschuhschneeballwerfer (someone who wears gloves to throw snowballs.) 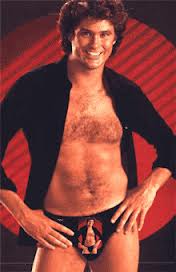 Despite German’s legendary efficiency, there are still some situations that need a descriptor. So I’m throwing my tiny green hat into the semantic ring to come up with my own German efficiency words. Such as…

SkittleGrossen — purposely buying candy you hate to avoid eating it all before Halloween.

Marina: “Damn it! Patrick ate all the mini-Snickers I bought for the trick-or-treaters.”

Me: “You should have SkittleGrossened. I’m giving out circus peanuts and Clamato.”

Legend has it that these were once edible.

Druncle — the randy, drunk uncle who skeeves everyone out during the holidays with inappropriate  topics.

Me: “My druncle freaked us all out at Christmas by talking about his nipples. Again.” 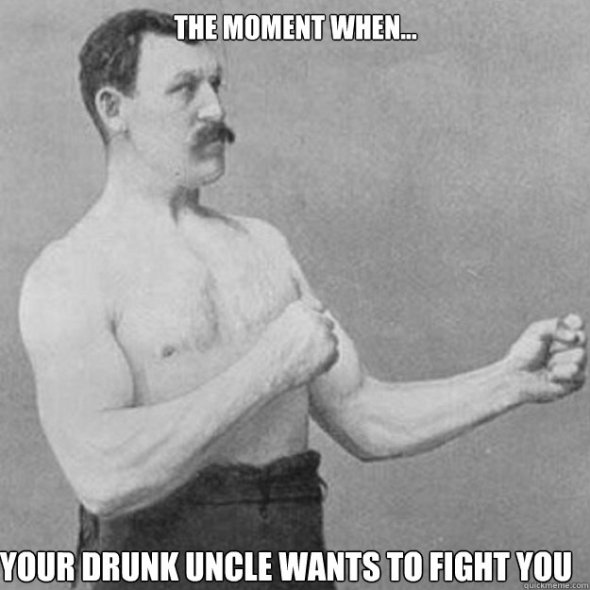 Or wrestle with his shirt off.

BoozenKinder — the practice of making the presence of ill-behaved children more tolerable by pretending that they are tiny, inebriated adults.

A small boy runs by, wearing his underpants like a mask and screeching “I’m a Batman! Wheeeeee!!!”

What new German words do you think we need?

Children at a North London primary school were astonished to find a crashed UFO half-buried in the tarmac when they went to class a few weeks ago. The ship was being guarded by a constable while a forensics officer collected evidence.

Rather than British Roswell, however, it turned out to be a staged event by the parents meant to inspire the children on Creative Writing Day.

The coolest thing that ever happened at my elementary was a trip to the local bakery. And those lucky little British kids got a U-F-freakin’-O crash in the middle of their playground… just to inspire them to write well. 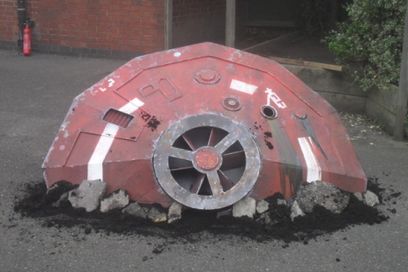 Here’s a close-up of the saucer to rub it in.

I’m currently campaigning to be adopted by one of these brilliant parents, but it’s not going well. Something about “you’re already an adult” blah blah “let go of my leg” blah blah “restraining order.” Kids just do NOT know how good they’ve got it these days.

And I’m officially turning into Grandpa Simpson in 3… 2…

If I’m not back at the home by nine, they declare me legally dead and collect my insurance.

When the body of Danny Vanzandt was discovered in his Oklahoma home this February, the 65-year-old man’s remains had been reduced to a smoking heap of black ash in his kitchen. However, except for scorch marks on the nearby refrigerator, nothing else in the house had been burned (including the floor underneath the body). The local fire marshal called it a mystery and the Sequoyah County Sheriff said that Spontaneous Human Combustion (SHC) had not been ruled out as cause of death.

Vanzandt was known to be a heavy smoker and drinker; both common traits in reported victims of this mysterious phenomenon. And almost all of the reports mention that he reportedly had very poor hygiene, which is just rude. Good Lord, the poor man is dead. No need to shame him about deodorant at this point.

This is very sad so I’m not making any jokes.

The cause of death has now been ruled as a heart attack, with the theory that the victim fell onto a lit cigarette as he died. Which still doesn’t explain why the house didn’t burn down along with him. To reduce the body to the level of incineration found, the body would have had to have burned for 10 hours straight, according to reports. And the house was a veritable tinder box, with no running water.

Very, very odd… Where are Mulder and Scully when you need them?

Because “Vile Sexual Predator Who Should Be Bludgeoned and Fed to Sharks” wouldn’t fit on the cover.

However, Americans are stepping up their perv game to bring the world — and I’m not kidding — dinosaur-based erotica. Apparently there is a small subset of U.S. women whose deepest, darkest fantasy involves is being taken against their will by… a brontosaurus. Amazon.com actually sells sexy(?) novellas about lusty cave women being molested by megalodons and schtupped by stegosauruses.

I did not Photoshop this. I swear.

These dino-sex enthusiasts also support the narrow but apparently lucrative paleo-porn video market. For which, I would like to suggest the following titles:

* Land of the Lust

* Yabba Dabba Do Me

Yes, that is a lady being violated by a beak. Our friend The Loch Ness Monster is covering up the grossest bit, presumably while trying not to throw up. And she’s a monster.

In conclusion, when Jurassic Park 4 hits this theaters in 2015, you may want to avoid sitting next to anyone with a fistful of $1’s  ready to throw at the screen. (And make sure they’re wearing pants.)