Fox Television Group has just announced a possible re-boot of “The X-Files” series, with David Duchovny and Gillian Anderson coming back to portray Mulder and Scully. Must. Not. Explode. With. Joy. 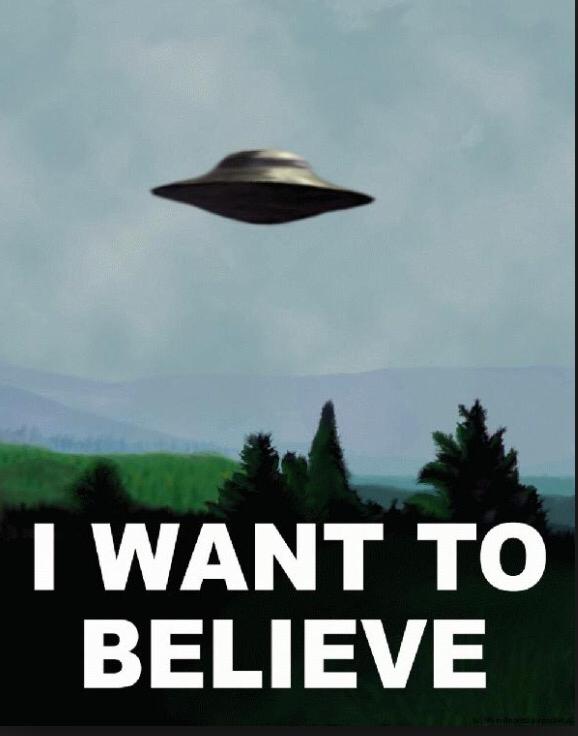 I want to believe… this will happen.

I was in my backyard last Thursday night (08/28/14) wrangling dogs, when I saw the proverbial “lights in the sky.” At first, I thought it was the moon until I realized that the moon was shining in the sky behind me. I was standing there in the dark, completely transfixed by this thin crescent of light glowing against the night sky. Suddenly, it shrank down into a single orb of intense light and… vanished.

I stood there for a full minute afterward, completely unnerved and wondering if I had just had my first UFO sighting. I was half stoked and half freaked out.

Tragically – for me, at least – there is evidence that what I witnessed was most likely the perihelion of a rare comet called Comet 289/Blanpain. Which is pretty disappointing. If you’re going to witness a mysterious comet, you’re really hoping it will be named something more dramatic, like Frankenstein Thunderhammer or Blaze Destiny’Boom. *Sigh*

Professor Frink: “That comet is headed straight for us, with the fire and the impact and the 100% chance of pain… pain in the glavin!”

On July 8, 1947, the Roswell Daily Record startled the nation with a bold headline.

And then the cover-up began.

In the “Clearly They’re Now Just Messing with Us” news category, NASA conducted a test flight on Saturday for its new vehicle, which just happens to look exactly like a flying saucer. Designed to help slow the descent of heavy spacecraft into Mars’ thin atmosphere, the Low-Density Supersonic Decelerator (LDSD) failed to deploy its parachute during the test but NASA officials still declared the experiment a success.

A NASA spokesperson stated “The test vehicle worked beautifully, and we met all of our flight objectives. *Also, in no way did we reverse-engineer the craft’s design from anything found at Roswell. Werner Von Braun who?”

*Full disclosure: I may or may not have made that last bit up but you know they were thinking it.

Special thanks to FOB extraordinaire Kang for both sending me this story and loaning me the hardware to publish it. You rock, Kang! 🙂

I’m a simple woman. I only asked Santa for a few small things this year: eternal youth, world domination and this UFO detector. (Click here to see it; SO snazzy and it’s getting great reviews on Amazon.com, including this one from someone who is definitely not an alien.)

I knew I was chancing it on the youth and world domination requests, but I felt certain that someone would buy me the UFO detector. I mean, c’mon… it even got a sterling review from the peerless George Takei (AKA Sulu from Star Trek.) Just look at this oiled blue steel beauty:

For a 20% discount, don’t forget to use the code THECIAISTOTESNOTTRACKINGTHESEPLEASESPEAKDIRECTLYINTOTHESWIRLYTHING

But did I get one? No! It’s like Santa doesn’t even know me at all.

Screw the holidays. I am converting to Jediism. Maybe next year I’ll at least get a goddamned light saber.