Simpsons Theme Park: I Want To Go To There

D’oh! My dreams have come true — I will soon be able to drink overpriced beer at Moe’s Tavern and buy Hellboy comics at The Android’s Dungeon in Springfield. Universal Studios is building a Simpsons theme park in Orlando, Florida, that will include working versions of:

* The Frying Dutchman, and

Most of all, I am looking forward to the new “intergalactic spinning” ride called Kang &  Kodos’ Twirl N’ Hurl, which will (hopefully) send me ***twirling, twirling, twirling towards freedom.

***Note: You must be a profound  Simpsons nerd to get this joke. If you didn’t laugh, congratulate yourself on what must be a rich and interesting social life. 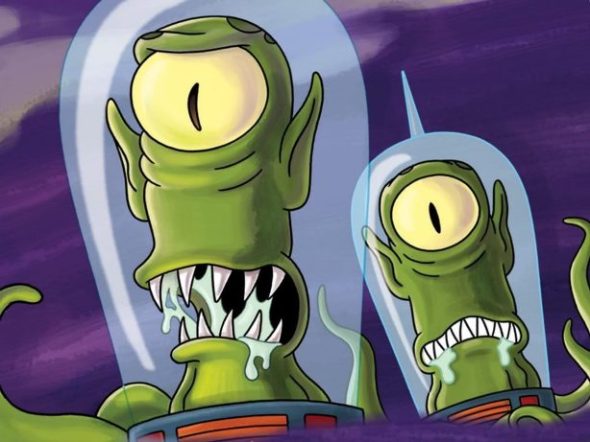 Kodos: They do realize that boarding the Twirl N’ Hurl will send them into an alternate slave dimension, right?

Kang: Hush, sister. Just keep smiling harmlessly. The humans will be giving us tentacle rubs in no time! Bwa-ha-ha-ha-ha-ha!!!

Tentacle jokes: They never get old.

Ghost hunters beware! You may get more than you bargained for while trying to catch a ghost on tape.

An Australian ghost buff recently set up cameras in his kitchen, hoping to catch some paranormal activity on film. When he reviewed the tape, there was lots of moaning and wailing going on. Unfortunately for him, it was not the spooky kind. Instead, he found footage of his 16-year-old son having sex with the man’s 28-year-old girlfriend.

There were no scary skeletons involved, but someone was definitely getting boned. Har! Tip your waitstaff. I’ll be here all week…

Ghost sex: On the plus side, they’re always stiff. On the downside, it’s hell getting ectoplasm out of the sheets.

I went to my first paranormal convention last weekend, and it was — to use some deep-fried Southern parlance — a hoot. Tons of cheesy new age psychics/fortune tellers abounded. The most hilarious booth (called something idiotic like Angelic Dolphin Crystal Channeling) featured a giant poster of a dolphin leaping over a rainbow using badly Photoshopped eagle wings. I could have literally created something more realistic with PaintShop Pro. Using my feet.

There were numerous paranormal groups there. The good folks from Paranologies.com had a table of customized ghost-hunting equipment. Really cool stuff, such as this Phono-Pod:

And this item, which I assume to be some sort of Steampunk Ghost Calculator:

I don’t know what it does but I still want it.

There was also, inexplicably, a booth selling homemade jerky. Tasty but hardly paranormal. Unless it was haunted jerky. Or possibly undead jerky?

A BIG shout-out to FOB/artist extraordinaire/incredible cook Judy Lawson, the newest member to sign up to  follow No Faint Hearts in Fort Worth.

When my Dad was in hospice care, the lovely Ms. Judy volunteered to make a variety of his favorite dishes for me to take to him for dinner since his appetite was waning. (Her fried chicken is AMAZING – he got pretty obsessive about it. It was that good.) She also made incredible dinners for myself and my family since she knew how busy/crazy tired we were at the time.

Much love to a wonderful girl who I firmly believe to be a Castiel-esque angel in disguise.

I also made you several bad-ass batches of fried chicken. You’re welcome.

Best of Fort Worth: The Mambo Taxi

Okay, so far the blog’s been about ghosts, secret tunnels, Bigfoot and Star Wars. Everything but Fort Worth, right? Allow me to rectify this situation.

The best cocktail available in Fort Worth is, hands down, the fabulous Mambo Taxi from Mi Cocina. It tastes like margarita, sangria and a little bit of heaven all swirled into one glass of frosty goodness. There’s also a version called the Mambo Limousine but that’s just a Mambo Taxi in a bigger glass. Trust me, you’re going to want to go with the Taxi. These things are potent. Mi Cocina also has amazing salsa, but I digress.

Behold, the King of Cowtown Cocktails: the magnificent Mambo Taxi.

I think it’s called a Mambo Taxi because  you have to call a cab if you drink more than two.

Kang: That was only moderately funny at best.

Kodos: Agreed.  We shall activate the Destructo-Ray…. right after some final probing. Quick, locate the one they call Justin Bieber.

The Huffington Post provided comprehensive coverage of the recent Citizen Hearing on Disclosure, a five-day Congressional-style hearing held at the National Press Club in Washington, D.C. from April 29 – May 3. While HuffPo did file it under their Weird News section, the coverage is straight-forward, with none of the joking tone that the media usually employs when reporting on UFOs.

Check it out. There are no tinfoil-hat, conspiracy nuts speaking in these sessions. These are, for the most part, former Congressmen and Senators, former astronauts, and retired high-ranking Air Force officers. There is also video of a deathbed disclosure of government knowledge of aliens from an ex-CIA operative. Note: Ignore the crappy, circa-1997 look to the website featuring the ex-CIA confession. Just focus on the compelling video.

Are these ships from another galaxy or just top-secret military vehicles of our own?  It’s open for debate. But, whether you are firmly in the “UFOs don’t exist” camp OR a full-fledged UFO believer, I think you’ll find these articles and the video interesting.

A special THANK YOU to FOB (friend of the blog) Jennifer Malone for sending this in, btw. 🙂

Kang: This post isn’t funny at all.  When is she going to get back to making Star Wars jokes?

Kodos: I don’t know but this sucks. Put her on the PROBE ROSTER!

May the Fourth Be With You.

Shoot the first person who laughs at this terrible pun, Chewie.

Now I love zombies as much as the next person, but this is a little creepy.  A gentleman named David VanDerBeek is running for Governor of Nevada in 2014. On his website, VanDerBeek claims that he found a page on FEMA’s site that listed plans for a disaster drill called — and I quote  — ZOMBIE UFO CRASH DISASTER FULL-SCALE EXERCISE. (See screenshot below.) He says that when he contacted FEMA for more information, they took the page down.

So either this guy’s a gubernatorial conspiracy nut with mad Photoshop skillz, or FEMA has a better sense of humor than we’ve been led to believe. This makes no sense. A zombie disaster drill? Sure. A UFO crash response exercise? Duh. (I’ve been to Roswell. I didn’t just fall off the alien turnip truck.)

But a Zombie UFO Crash drill? That’s just ridiculous. Zombies don’t have the motor skills required to fly a UFO. Everyone knows that.

This had better be fake. I have no idea how to fight off intergalactic zombies.