I know that this sounds like the set-up to an incredibly insensitive joke but it’s true. A General Electric engineer (and part-time KKK member) recently solicited both the KKK and a synagogue to provide financial backing for a creepy particle-radiation weapon he planned to build. WTF?

I thought the KKK hated everyone, including Jewish people. Not sure if I should congratulate the Klan for being inclusive or commiserate with the rabbi for having to deal with such a giant bag of dicks.

Luckily both the KKK and the rabbi ratted him out to the Feds and he was arrested before he could complete what was basically a giant weaponized microwave — proving that if you are crazy enough for the KKK and a synagogue to team up against you, you are indeed batshit.

Hey, ya’ll. I use mine to melt butter.

Who Wants to See Wolfcop?

LAUGH your ass off as Wolfcop fights a gang of toothless rednecks!

THRILL as Wolfcop takes a blow to the head from a cultist wearing a (I am guessing) Honey Boo Boo mask!

CHEER as Wolfcop starts howling along with his own police siren!

(This is an actual movie that is being made. Swear to God. Thanks to FOB Kevin Pendergraft for his reliably hilarious emails.)

And now, because I just figured out how to do polls…  a poll on Wolfcop! Go ahead – take the poll. You know you want to.

Prepare To Waste At Least Two Hours On This

Consider yourself warned. This series on YouTube called Honest Trailers is hilarious and fairly addictive. Start here with The Avengers.

These are so funny that you can easily find yourself sucked into watching them for hours. Be sure watch the ones for Lord of the Rings (featuring convenient ghost armies) and Skyfall, starring my baby daddy Daniel Craig. 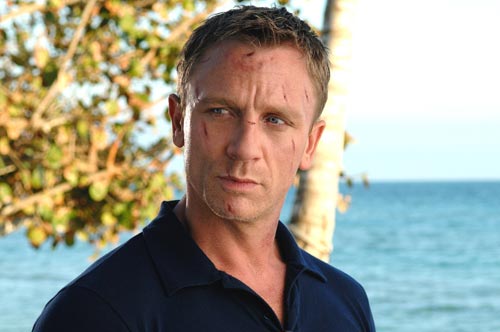 It’s true and he’s got the scars to prove it.

It’s the question that inevitably comes up at parties: “If you could choose a super-power, what would it be?” (Full disclosure: I go to some pretty nerdy parties.)

Think about the idiotic powers that some superheroes have. Wonder Woman’s invisible plane? In no way is that both impractical and likely to get you shot out of the sky by the military. Or, the lowest of all superheroes: Aquaman. That poor bastard’s only gift is the ability to telepathically talk to fish.

Aquaman: “This is your master. I command you to come rescue me from the evil Sea Kelp Killer.”

Clearly the only superpower worth having is the mighty JEDI MIND TRICK. You can bend people to your will . Fighting crime? Walk up to the criminal and say “You no longer have the urge to be a douchebag. You now want to do charity work. While wearing clown shoes.”

What would  you would choose.? 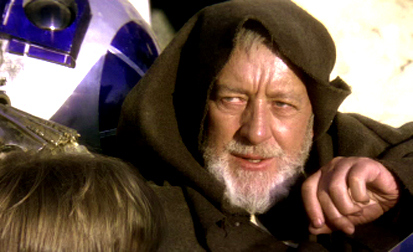 These are not the droids you’re looking for. You want to give me your life savings.

A New Jersey fisherman caught a horrifying creature that’s being called The New Jersey Sea Monster in the Raritan River two years ago. Although it looks like a sci-fi  special effect — possibly from a movie called Toothy Vagina Snake II: The Reckoning — it is, in fact, a sea lamprey. Which is basically a giant tentacle with teeth.  In other words, this is the basis for some deeply disturbing tentacle sex anime movies. 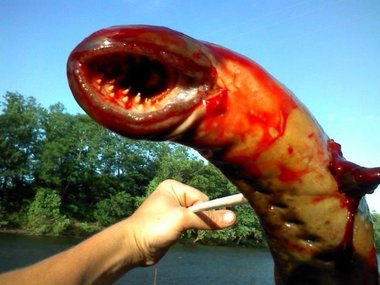 An Air China Boeing 757 recently collided with an unknown flying object (UFO) at 26,000 feet, causing the pilots to make an emergency landing. When the plane reached the ground, the pilots were in for a shock — the nose cone of the plane was completely caved in. Check it out below: 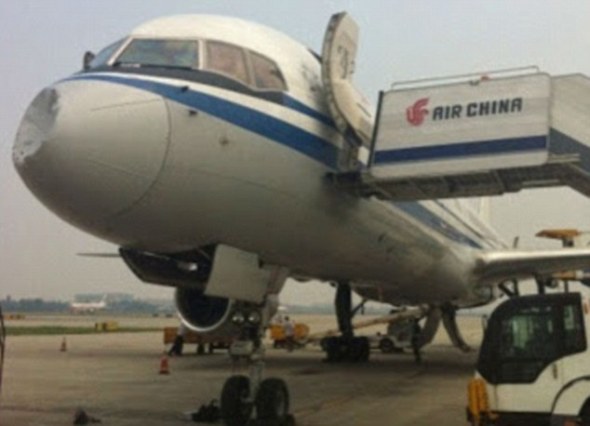 Nothing to see here. Move along. 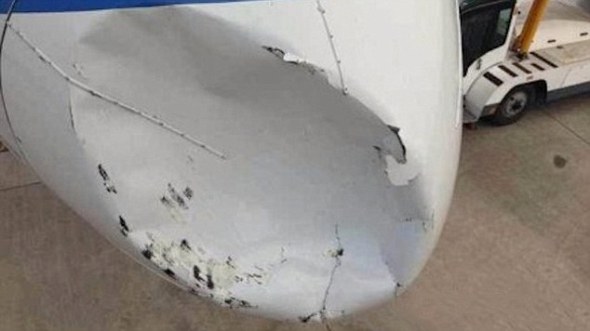 The Law of Physics: “Fuck you.”

And Earth Will Be Destroyed By Space Aliens in 3, 2…

The Blue Marble Space Institute of Science has created an online program in which the general public (always the bastion of diplomacy and sanity) can pay to post messages that will be broadcast into outer space. So, they’re going to let random Internet trolls trash-talk — and you know that’s what it will boil down to — an almost certainly more technologically advanced race. That seems like a shrewd and in-no-way-dangerous thing to do.

Called METI (Messaging for Extraterrestrial Intelligence), the program is sort of a pay-per-view version of SETI — a legitimate scientific organization that is dedicated to seeking out life on other planets. Scientists at SETI have sent radio messages into the cosmos in the past (beginning with the 1974 Arecibo Observatory message), hoping to reach intelligent alien life.

Of course, the scientific messages are carefully composed to include peaceful sentiments and the world’s best art and literature. (For instance, Carl Sagan included a copy of Texas’ own bluesman Blind Willie Johnson’s beautiful version of Dark Was The Night on the 1977 Voyager spacecraft mission.) Unlike whatever crap the human race decides to throw out there.

It will take about 35 years for the METI messages to reach anything. After that, I’m pretty sure we’re doomed.

We’re here to destroy your planet. Someone sent us Nickelback, so we assume this is a mercy killing.

Special thanks to FOB Kang for sending this in! 🙂

Residents of Herefordshire, England, are all shook up over a tree that they claim looks like Elvis. I think it looks like Rockabilly Lincoln With A Goiter. You be the judge.

Four score and seven years ago, I had a thyroid problem.

Police in Brazil are puzzled by the discovery that an unknown subject has been leaving elaborately gift-wrapped boxes containing human skulls around the town of Sao Paulo. Forensics tests reveal that the skulls are very old and some have dirt on them, leading some people (okay, just me) to theorize that the culprit is robbing graves to obtain the skulls.

Video cameras have captured footage of a woman in a long skirt leaving the seven gift boxes, which have been left almost exclusively (here it gets even weirder) Mormon temples and foreign consulates. (WTH?) Authorities are speculating that the boxes may be part of an occult ritual. Bottom line to Brazilians — if you find a gift-wrapped box randomly lying around public, don’t open it.

In anticipation of the new NIN album “Hesitation Marks” – which drops in September – Trent has released the first single “Came Back Haunted.” You can listen to it here.

It’s hard and fast and sounds a bit like “Survivalism.” Love it. Can’t wait to hear the rest of the album.

BTW, “hesitation marks” are the shallow, initial test cuts usually found near the fatal wounds on a suicide victim who slashes their wrists or throat.  Clearly Trent’s still the upbeat, happy-go-lucky artist we all know and love.

This is my happy face. Wait, is there something behind me?