← Chinese Jet vs. UFO: The UFO Won
Does this tree look like Elvis? →

And Earth Will Be Destroyed By Space Aliens in 3, 2…

The Blue Marble Space Institute of Science has created an online program in which the general public (always the bastion of diplomacy and sanity) can pay to post messages that will be broadcast into outer space. So, they’re going to let random Internet trolls trash-talk — and you know that’s what it will boil down to — an almost certainly more technologically advanced race. That seems like a shrewd and in-no-way-dangerous thing to do.

Called METI (Messaging for Extraterrestrial Intelligence), the program is sort of a pay-per-view version of SETI — a legitimate scientific organization that is dedicated to seeking out life on other planets. Scientists at SETI have sent radio messages into the cosmos in the past (beginning with the 1974 Arecibo Observatory message), hoping to reach intelligent alien life.

Of course, the scientific messages are carefully composed to include peaceful sentiments and the world’s best art and literature. (For instance, Carl Sagan included a copy of Texas’ own bluesman Blind Willie Johnson’s beautiful version of Dark Was The Night on the 1977 Voyager spacecraft mission.) Unlike whatever crap the human race decides to throw out there.

It will take about 35 years for the METI messages to reach anything. After that, I’m pretty sure we’re doomed. 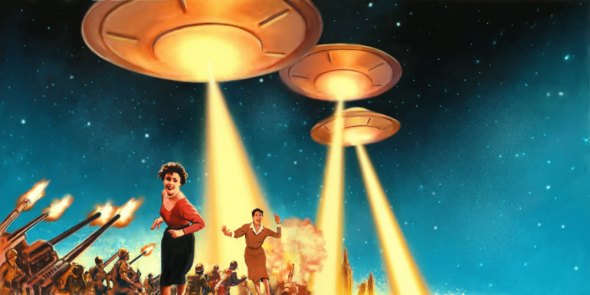 We’re here to destroy your planet. Someone sent us Nickelback, so we assume this is a mercy killing.

Special thanks to FOB Kang for sending this in! 🙂

2 Comments on “And Earth Will Be Destroyed By Space Aliens in 3, 2…”