The Odd Gifts of Ingo Swann

Ingo Swann, who worked with the CIA in the 1970’s to spy on Russia via remote viewing and co-created the agency’s Stargate Project, died earlier this year. Famous for powerful psychic abilities and government-funded parapsychology experiments, his life story reads like a Fringe script. Except weirder.

Swann’s life was a paradox. Believing that his psychic/telekinetic powers were a natural ability, he decried the mystical  trappings surrounding the field and encouraged rational study of the subject. And to prove his power, Ingo famously announced the existence of planetary rings around the planet Jupiter in 1973 — six years before the Voyager probe confirmed his findings.

However, no matter how hard he worked to make parapsychology seem legitimate, Ingo’s tireless and profound eccentricity cancelled out the effort. Scientists tend to not take you seriously when you spend your down time creating impossibly cheesy “psychic” art  and claiming to have had sexy encounters with a lady space alien in your autobiography, which has the in-no-way-deranged title: “Penetration: The Question of Extraterrestrial and Human Telepathy.”

So, basically it’s a draw. Thanks for nothing, Ingo.

I went to my first paranormal convention last weekend, and it was — to use some deep-fried Southern parlance — a hoot. Tons of cheesy new age psychics/fortune tellers abounded. The most hilarious booth (called something idiotic like Angelic Dolphin Crystal Channeling) featured a giant poster of a dolphin leaping over a rainbow using badly Photoshopped eagle wings. I could have literally created something more realistic with PaintShop Pro. Using my feet.

There were numerous paranormal groups there. The good folks from Paranologies.com had a table of customized ghost-hunting equipment. Really cool stuff, such as this Phono-Pod:

And this item, which I assume to be some sort of Steampunk Ghost Calculator: 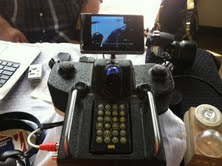 I don’t know what it does but I still want it.

There was also, inexplicably, a booth selling homemade jerky. Tasty but hardly paranormal. Unless it was haunted jerky. Or possibly undead jerky? 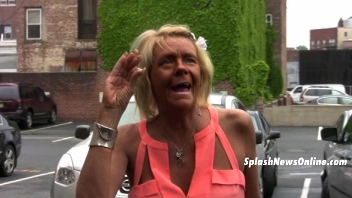