Ghost Adventures is Fake? I Am Shocked!

Said no one ever.

Paranormal researchers are up in arms about Ghost Adventures, claiming that the show is fake. It features three muscle-bound asshats going to “haunted” locations to heckle the spirit world. They try to embarrass the ghosts into appearing by yelling things like “Are you scared of me?” and “Don’t be such a pussy!”  Because the dead are definitely worried about their street cred.

Understandably, the ghosts never appear so you end up watching 40 minutes of douchebags in Ed Hardy shirts and laughable belt buckles (see below) bellowing threats at nothing.

Sadly, they’ve pulled this routine at the site of some very tragic incidents, such as the Villisca Axe Murder house. Even if they died 100 years ago, I still think it’s still in bad taste to tell dead people  to “suck it.”

Because I am mildly obsessed with paranormal shows like Destination Truth and UFO Files, I recently joined a local ghost-hunting group. The investigation took place at a very old movie theater that was being renovated. “Legend” has it that the projectionist committed suicide in the projection booth but there were no records to back that info up, so I have my doubts.

I was impressed with all the professional equipment my fellow ghosthunters showed up with — EVP recorders, video cameras, laser grids to track movement, etc. Our fearless leader, a lovely woman called Annette, took pity on me and loaned me an EMF detector (AKA a “K2” to the cool kids.) Sadly, I didn’t get a haunted vibe about the place (although it was creepy as hell, esp. with all the lights out.) But this is only my first ghost hunt and I am sure the next one will be spookier. I  did get some cool pictures, though. Check it out below. 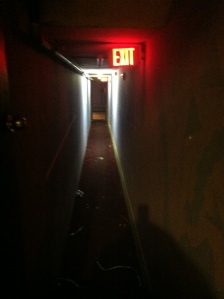