The U-28 Abomination: A WW I Sea Monster Story

Here’s a great sea monster story straight from the good people at www.americanmonsters.com. (Which may be my new favorite web site.)

During World War 1,  Commander Freiherr Georg-Günther von Forstner encountered what he and his crew described as a 60-foot-long crocodile off the coast of Ireland. After his U-Boat (the U-28 Schmidt) sank the British steamer Iberian on July 30, 1915, the German captain and his crew were shocked to witness a violent explosion of ship debris shoot into the air that included a dinosaur-sized crocodile. 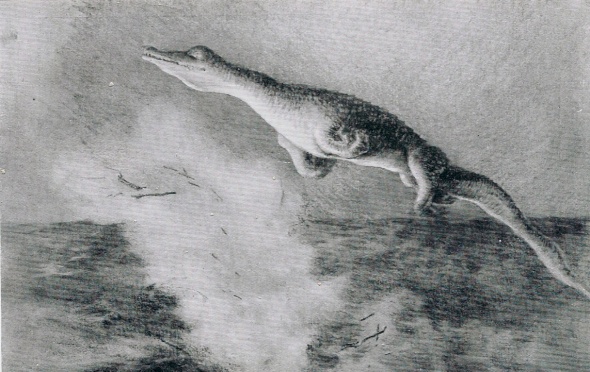 In 1935, von Forstner published a book about the event called “The Case for The Sea Serpent.” Here’s a quote:

“We were unable to identify the creature, but all of us agreed that it resembled an aquatic crocodile, which was about 60-feet long, with four limbs resembling large webbed feet, a long, pointed tail and a head which also tapered to a point. Unfortunately we were not able to take a photograph, for the animal sank out of sight after ten or fifteen seconds.”

German U-Boat captains are not particularly whimsical men. Nor are they given to flights of fancy involving improbably giant animals, especially with Herr Hitler breathing down their neck. So for Captain von Forstner to publish an entire BOOK about a sea monster in 1935, either one of two things had to have happened:

1. von Forstner’s Jarlsberg cheese finally slid off his cracker. Or,

2. He saw a goddamn sea monster.

I think you know which way I’m leaning.

North. I’m leaning North, because I think that’s the direction of Ireland from here. (Full disclosure: I am not good with directions.)

4 Comments on “The U-28 Abomination: A WW I Sea Monster Story”